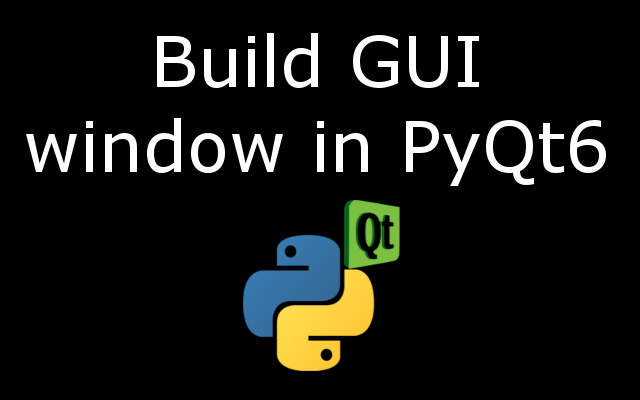 In this lesson we are going to learn How to Build GUI Window with Python & PyQt6, so before building our gui

platforms and most mobile or embedded platforms. Most GUI programs created with Qt have a native-looking interface,

in which case Qt is classified as a widget toolkit. Non-GUI programs can also be developed, such as command-line tools and

PyQt is a set of Python bindings for building cross-platform applications, PyQt combines all the advantages of

Qt and Python. With PyQt, you can include Qt libraries in Python code, enabling you to write GUI applications in

Python. In other words, we can say that PyQt allows you to access all the facilities provided by Qt through Python

There are different versions of PyQt in the recent years, we had PyQt4, after that PyQt5 and now we have the latest

version of PyQt and that is PyQt6, according to riverbank computing company, there will be no new update for PyQt4,

and in this course we will just focus on PyQt6 and PyQt5, and the majority part will be related to PyQt6.

Now let’s build our first gui window with Python and PyQt6, but before that we need to install PyQt6.

This is the complete code for this lesson.

In the above code first we have imported our module and classes, in PyQt everything is module and every module

is divided in to different classes and every class has its own functionality, for example from QtWidgets module we

are importing some classes, now let’s talk about QtWidgets module.

There are about 138 classes that are related to QtWidget Module.

After importing module and classes, we need to create the object of QApplication class, in every PyQt GUI window,

What is QApplication Class ?

specializes QGuiApplication with some functionality needed for QWidget-based applications, for any GUI

application using Qt, there is precisely one Application object, no matter whether the application has 0, 1, 2

or more windows at any given time.

if you are using command prompt or command line utility than you can pass sys.argv in QApplication , but if you

don’t want to use you can just give empty list as parameter.

After that we are creating the object of QWidget class, QWidget class is related to QtWidgets module, and it is used

for creating of our window, there are three types of window classes that you can use in PyQt, we have QWidget,

QMainWindow and QDialog, now let’s talk about the difference between these window type classes.

can be QDialog, QWidget, or QMainWindow, depending on the template you require.

Now run your complete code and this will be the result.