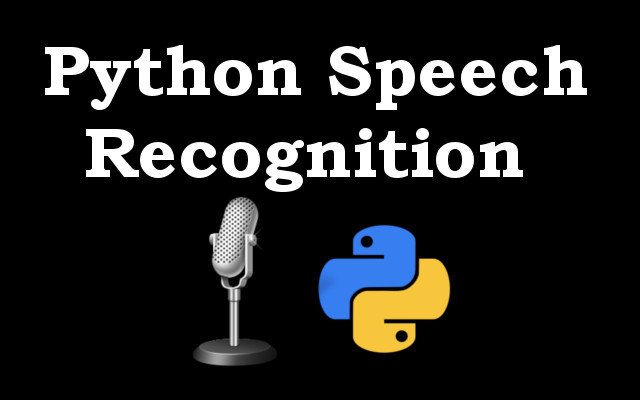 In this article we are going to talk about Python Speech Recognition Tutorial for Beginners,

we will create different examples on converting audio to text and also text to audio,

Google Speech, so it is a library for performing speech recognition, with support for several

For the installation you can just use pip, also you can download the source

distribution from PyPI, and extract the archive. In the folder, run python setup.py

PyAudio is required if and only if you want to use microphone input (Microphone).

bugs when recording from microphones in certain situations. now if you are using python 3.6

This is the installation.

OK now let’s create our first example, in this example we are going to convert our audio to

text , we want to say something using Microphone, and after that it will be automatically

converted to text and saved in our working directory.

also we need to add this line of code, it is used for removing noises if we have in the sound.

And in here we are recognizing the speech using Google Speech.

If you need to record your audio than you can use this code.

Run the code say something in the Microphone and this is the result.

OK now let’s create another example, in this time i want to open a website using speech

recognition, for example i want to say google.com in my microphone and after that it will

open the website automatically for me, so this the code for this example.

First of all you need to specify the path of your browser, as iam using Google Chrome

so this is the path for my browser.

also for removing noises we need to add this line of code.

In here first we recognize the audio and after that we open the website.

microphone in python, now sometimes you need to convert a recorded audio to text,

for example we have a recorded audio and we want to convert this audio to text, so this

is the complete code for this.

OK now in this code we have just changed the source, this time we are using not

Microphone, but we are using AudioFile.

Now run the code and this the result, make sure that you have already added a

recorded audio in your working directory.

Converting Text To Speech in Python

OK we have learned that how you can convert audio to text using google speech in Python,

now we want to learn how you can convert text to audio, for this we are using another library.

there are two ways the you can convert your Text to Audio or Speech, the first way is using

What is Google Text To Speech (gTTS) ?

for further audio manipulation, or stdout.

You can use pip for the installation.

So now this is the code for our example.

This code convert our text to audio and after that save in our working directory.

In the second way we are using pyttsx3 library.

pyttsx3 is a text-to-speech conversion library in Python. Unlike alternative libraries,

it works offline, and is compatible with both Python 2 and 3.

If you receive errors such as No module named win32com.client, No module

named win32, or No module named win32api, you will need to additionally install

This is the complete code.