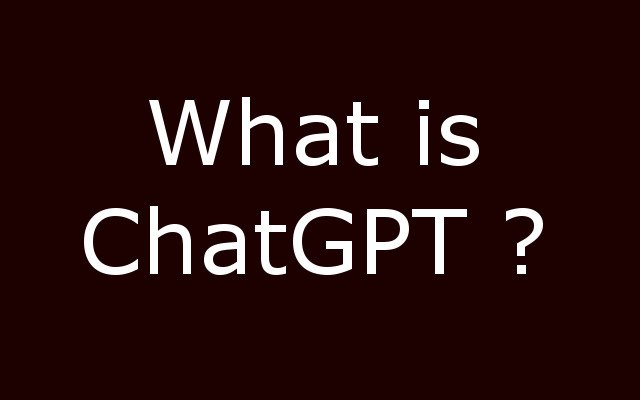 In this article we want to talk about What is ChatGPT.

ChatGPT is trained on a massive dataset of conversational data and is designed to understand and respond to natural language input. This makes it well-suited for tasks such as language translation, question answering, and conversation generation.

One of the main advantages of ChatGPT is its ability to generate human-like text. This makes it useful for a wide range of natural language processing tasks such as chatbots, language translation, and text summarization.

It’s also capable of understanding context, and generating coherent answers, in a conversational manner. This makes it an excellent model for tasks such as automated customer service, personalized recommendations, and more.

The model is pre-trained, which means it can be fine-tuned to a specific task with a relatively small amount of data, and it can be used to generate text on a wide range of topics.

Is ChatGPT is Danger ?

ChatGPT, like any other AI-powered tool, has the potential to be used for both beneficial and harmful purposes. It is important to consider the ethical implications of using such a powerful technology.

One of the main concerns with pre-trained language models such as ChatGPT is the potential for them to perpetuate and amplify biases present in the data they were trained on. ChatGPT, as with other language models, can also generate text that is misleading, offensive, or harmful if it is not used responsibly.

It is also important to note that ChatGPT can be fine-tuned to generate text that is indistinguishable from human-written text, which can be used to create fake news, impersonation, or phishing attacks.

However, it’s also important to note that ChatGPT has a wide range of potential use cases that can be beneficial for society, such as improving customer service, personalizing recommendations, and more.

It is the responsibility of developers and organizations to use ChatGPT in an ethical and responsible manner, and consider the potential risks and benefits of their use-cases.

How to Use ChatGPT ?

Please note that these are general steps and the specific implementation details will depend on your use case, language and framework used, and the environment you are working on.

What is the Main Destination of ChatGPT ?

The main destination of ChatGPT is to generate human-like text based on natural language input. It is a pre-trained language model that can be fine-tuned to a specific task, making it well-suited for a wide range of natural language processing (NLP) tasks such as:

Please note that these are just a few examples of the potential use cases for ChatGPT, as the model’s capabilities can be leveraged in a wide range of NLP tasks.

Is ChatGPT is Free ?

ChatGPT is not completely free, it is available through the OpenAI GPT-3 API which is a paid service. However, you can access the pre-trained model for free for personal and non-commercial use, but for commercial use, you need to pay for the API usage.

Additionally, you can also access the pre-trained models via Hugging Face’s model hub, where you can find a number of pre-trained models, including ChatGPT, that can be used for free with a Creative Commons Attribution 4.0 International (CC BY 4.0) license.

It’s important to note that even if you use the pre-trained model for free, you still need to pay for the computational resources required to fine-tune and use the model, whether you use cloud-based services or your own infrastructure.

To sum up, while the pre-trained model can be accessed for free, the usage of it for commercial purposes and the computational resources required to use it come with a cost.

ChatGPT can be used as a programming instructor to some extent. It can be fine-tuned to generate code examples and explanations based on natural language input, and it can also be used to answer programming-related questions.

For example, you can fine-tune ChatGPT on a dataset of programming tutorials and documentation, and then use it to generate code examples and explanations based on a given prompt. It could also be used to generate explanations for programming concepts and answer coding-related questions.

However, it’s important to note that ChatGPT is not a substitute for a human programming instructor. It’s a language model, which means it can generate text based on the data it’s been trained on. It can help with the understanding of certain concepts, but it can’t provide the human touch, feedback, and the ability to adjust to the student’s understanding level that a human instructor can.

It’s also important to note that ChatGPT is not a compiler, it can generate code but it can’t execute it, so the generated code will need to be tested and debugged by a human developer.

In summary, ChatGPT can be used as a programming instructor to some extent, but it’s not a substitute for a human instructor, and it’s not a compiler. It can generate code examples and explanations based on natural language input and answer coding-related questions. But it’s still important to have a human touch and feedback in programming education.