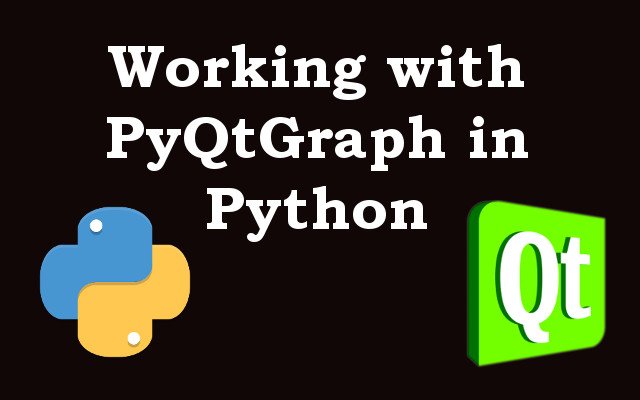 In this PyQtGraph Tutorial  we are going to learn Drawing Graphs in Python with PyQtGraph ,

PySide2 and numpy. It is intended for use in mathematics / scientific / engineering

applications. Despite being written entirely in python, the library is very fast due to its

display, and OpenGL for 3D display.

OK first of all you need to install PyQtGraph, you can use pip for the installation.

OK now let’s draw a simple line Graphs in PyQtGraph, so this is the complete code

So these are the imports that you need, you can see that we have imported QApplication

from PyQt5, also we need to pyqtgraph.

You need to create the object of QApplication, the sys.argv parameter is a list of

arguments from a command line.

You can use plot() function from pyqtgraph for plotting our line graph.

We call app.exec_() to start up the event loop.

OK now let’s plot scatter graph in PyQtGraph, so first of all what is scatter plot, a scatter

y-axis. Scatter plots are used when you want to show the relationship between two variables.

This is the complete code for drawing scatter plot.

OK for drawing scatter plot first you need to give your values, we are using random

numbers from numpy library, and we give random values for the x and y positions.

After that we plot the scatter, using plot() function of pyqtgraph.

Let’s plot bargraphs in pyqtgraph, first of all what is BarGraph ? A bar graph is a

only certain discrete values. The dependent variable may be discrete or continuous.

The most common form of bar graph is the vertical bar graph, also called a column

graph. In a vertical bar graph, values of the independent variable are plotted along a

horizontal axis from left to right.

This is the code for creating bargraph.

In here we have created the object of QApplication and also Pyqtgraph.

These are the data for BarGraph.

So in here we are going to create our BarGraph items.

Also in here we are going to add our BarGraph items to the window.

This is for handling mouse clicks for BarGraph items.

In this section we want to draw curves in pyqtgraph, so this is the complete code.

This is the plotting data, we are using numpy for creating the data in a range.

In here we have given a title for the graph.

In this section we want to create legends, so first of all what are legends ? Legends are a

useful way to label data series plotted on a graph. now this is the code for this example.

In this code we have created pg.plot(), also we have given a title to our graph, after that

we added the legend to our graph.

And these are our data that we want to plot.